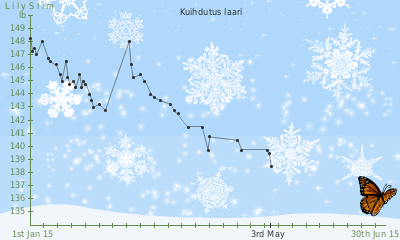 
Exercise: Walked extra to work 2x, 9 flights of stairs 1x at work, ran errands at lunch 3x.  Saturday walked 20min to get to car rental location.  On Sunday walked around college town 1 & had a campus tour, then drove to college town 2 and walked around.

I am posting this while on our college tour road trip!  The trip started Sunday, so the weight above is Saturday morning's weight, as I won't have access to my scale until Friday evening.  Saturday I had a beer and two sausages w/sodium, so unfortunately, the scale was unfriendly on Sunday.  Sniff.

I was wondering why I was stalling (I should consider it "maintaining") at 142lb, but then when I looked up how many calories I'd been eating in walnuts it made sense.  Monday & Tuesday I had probably 600+ calories in walnuts (several handfuls).  No wonder!  Wednesday I only had one handful.  I also had been eating bacon for breakfast, as they haven't had my favorite pork link.  The sodium was aggravating me, so I had omelets Thursday & Friday instead.


I hope I am turning into what Mark Sisson calls a fat-burning beast!  I am still shrinking, which is the best indicator.  I've had some sort of loss every week.
Posted by Veerukka at 7:38 AM 0 comments

Drinking too much water can mess with your diet!

I don't mean the amount of water that will literally make you sick (hypernatremia) which can be fatal.  I mean following the 8oz eight times a day rule.  I've never been much of a water drinker.  When I was a kid, I drank mostly milk.  Once I started working out 25 yrs ago, I started incorporating water into my diet.  However, it wasn't until the last 5 yrs, and especially the last 12 months, when I started drinking 100-150oz of water a day.  I was feeling bloated, and lots of blogs and websites say to drink more water, it'll flush the bloating away.  Well, that doesn't work, when the reason you are bloated is the excessive amounts of water!

My weight just wouldn't go down the first few months of this year, and the bloating was a serious problem.  I sometimes looked like I was 6 months pregnant, and my lungs and other organs were compressed, so that I felt like I was having a severe asthma attack.  The fact that my weight wasn't budging was so depressing, and with the bloating making me so uncomfortable, it was all I could do not to stuff my face, because after all, why bother trying?

Fortunately, in February I took a trip with my family to Belgium, where I wasn't able to carry ridiculous amounts of water around, and drank ale once every day.  I was shocked when I realized that my bloating vanished!  When I came back after our 6-day trip, I went right back to drinking tons of water, and the bloating returned immediately.  Hmmm.  I decided to do what worked in Belgium, so I stopped drinking lots of water and started having an ale a few times a week.  I felt so much better!  I was a little worried, so I ended up seeing a urologist on Friday, to make sure there wasn't anything wrong, and that I could continue my current regimen.  She said that most people are drinking too much, and that's why her business is booming.  Most of the time, if you drink only when you are thirsty, you are going to get enough liquids from your foods.  She told me that my body reacted the way it did because it was trying to tell me to stop drinking so much water.  Thankfully I listened.

Currently this is what I am drinking M-F:

Black tea is somewhat dehydrating for me, and on days after having the ale, I will try to have an additional glass of water during the day to normalize things.  On some days I will also have a diet soda, but I try to mix it up by having one with aspartame, and then having one later in the week with sucralose.  In the past, I found that if I drank a lot of diet soda, I would plateau, so I don't drink one every day, and I try to drink only 12oz, not a 20oz bottle.

If you are constantly bloated, consider that the problem might actually be too much water, and cut back.  If your bloating goes away, lucky you, an easy solution!
Posted by Veerukka at 3:19 PM 0 comments

I put down Saturday's weight, as Sunday's and Mondays were elevated due to almonds on Saturday (bloating) and sodium retention from bacon on Sunday.  I had my medicinal ale 2x this week.  I was coming back from lunch today, and I had to remind myself that I'm only 142lb now!  I'm feeling close to normal again!  Only 3.5kg, 8lb to go until my Dukan true weight (134).  I might go down to 130lb, I'm not sure, we shall see.  I'm not actually following the Dukan diet so much, as I've rarely had pure protein days, but I'm using the structure with the four stages, and will be following the Consolidation phase, where you have to continue a strict maintenance diet to let your body get used to its new lower weight.  The last time I got to goal weight, I did the usual, "I'm there, now I'm done!" which we all know doesn't work.

I did very well on our Saturday campus tour w/my elder DD.  I brought almonds with me, and a serving of yogurt in a thermos container, and drank some water.  OK, next time it'll be walnuts, but I was satisfied, and not tempted.

I will be posting about something interesting I've discovered about drinking too much water.
Posted by Veerukka at 2:56 PM 0 comments

Well, my weight went up somewhat at the beginning of the week.  Monday I didn't have enough at breakfast, and had sweet potato fries as a snack after lunch, and got bloated.  Funny to feel bloated at only 144.75lb!  It was still not fun.  I also had a larger serving at dinner (a second burger patty), so some of that extra poundage is from the added weight of the food that I ate (the sweet potatoes and burger).

Tuesday the bloating was subsiding, but there was a death in the family.  I was straining not to come undone at the end of the day at work, so I had a second helping of yogurt, some walnuts, and again a second burger patty.  I successfully didn't have any alcohol or sweets, but the extra calories and weight of the food kept the scale from moving down again.  Wednesday I went back to my smaller portions.  I was uncomfortable most of the week because my system was sluggish, but that all cleared up over the weekend. I had two Belgian ales on Friday night.  I felt great after the first one, but once again, the second one was too much.  Hopefully I'll remember this from now on! I am still shrinking, that's all that really matters.
Posted by Veerukka at 4:25 PM 2 comments

More of the same foods this week.  One day I didn't have enough to eat, and found a Bobo's oat bar at the bottom of a drawer at work.  OK, this might be gluten free, and was dairy free.  Still shrinking and losing weight though, so it didn't interfere with my progress too badly.  My weight today was actually 143.25lb, but I had a ton of bacon yesterday, so I stuck with yesterday's number.

I've decided to not start taking a fiber supplement.  If I eat vegetables almost every day, and some fruit a few times a week, that should be enough.  Right now that's peaches 2-3x a week, prunes 2-3x a week.  Cheaper, and better for you.

I will be on a road trip at the end of Sept/beginning of Oct for 6 days.  Just in time to derail my progress!  I'm taking a cooler bag with me to put in my yogurt, so I can keep my lunches small.  Every hotel has an ice machine, and some have refrigerators, so I think that will work.  Breakfast will also be fine, I can find eggs and bacon!  I may have a dessert once or twice, but I will see how I want to do this.  I don't plan to "go on vacation", and exercise will be a problem...  maybe I'll take my kettlebell with me.  At least I can do squats, pushups, etc.  I'm also going to make sure to park the car and walk around the towns we will be visiting.  I have to load some sort of steps/walking app on my phone.
Posted by Veerukka at 10:56 AM 0 comments

Again the scale didn't move during the week.  OK, maybe if I was walking more, it would.  Same successful grain/dairy free boring meal plan.  Once again, had peaches a few times, and prunes 1x, ale 2x.  One day I had 2 ales, that was too much.  Just one bottle is enough. Saturday I had a large ale (again more than I needed, but the bar didn't have a smaller safe alternative), and some cured meat slices, and Sunday I had 3-4 handfuls of walnuts.  I do feel smaller though, and the tape measure & clothes fit show a decrease, so we'll see if the scale moves more during the week this time.  I am going to up my walking this week.

I have also been doing ab work by doing leg lifts and just standing on one leg when I put on my makeup or wash my hands at the office.  So easy, and it's getting results!

I'm a busy mother of 2 teens, trying to get back into shape, so I can wear what I have in my closet. I also love knitting, movies, travel, and fonts.

Clothing I can now fit into: